Located between the Rokko mountain range and the Seto inland sea, the historical port city of Kobe has been embracing foreign cultures since the 9th century, giving the city a unique international flavour. Through its port, Kobe became a city of many “Japan firsts,” and to this day, a strong international influence can be seen in the city though its unique food culture, that includes the world-famous Kobe beef and Nada sake, and an eclectic mix of Japanese and late 19th century Western architecture.

Present day Kobe is home to 1.52 million people from 137 nations, and one of Asia largest medical clusters, the Kobe Biomedical Innovation Cluster. Playing host to over 370 organisations, the cluster, has given rise to cutting edge technical advancements, including the world’s most powerful supercomputer, “Fugaku,” and game changing regenerative medicine research and application using iPS cells. In the mountains, just above the city, the mineral rich waters of the Arima Hot Springs have provided a place of rest and recuperation since the 8th century. Kobe is dynamic city that combines the best of old and new Japan, with a unique international twist. 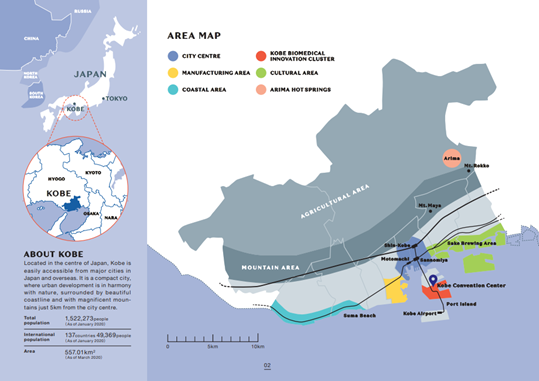 From the world to Kansai International Airport

If you are arriving by air, you will be flying into Kansai International Airport, located 30-60 minutes from Kobe.

From Kansai International Airport to Kobe 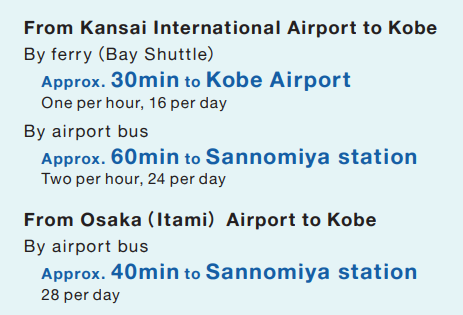 GETTING TO THE PORTOPIA HOTEL

Most banks with teller services in Japan are open Monday through Friday from 9 am to 3 pm and are closed on weekends and bank holidays. During operating hours, they provide their customers with services including cash deposits and withdrawals.

Note that not all ATMs in Japan operate 24 hours a day. ATMs at banks are generally open from 7 am to midnight on weekdays and 9 pm on weekends and bank holidays, although hours may be shorter at some branches. ATMs inside many convenience stores operate around the clock.

The national currency of Japan is the Japanese Yen (¥). To find the current exchange rate for the Yen, visit www.xe.com.

The use of credit cards and e-currency has increased in recent years, however Japan is still largely a cash-based society. While credit and travel money cards are accepted by larger hotels and department stores in Japan, many places (including small shops and restaurants) will still only accept cash, especially in smaller cities and towns.

Visa, Mastercard, JBC, and UnionPay are the most widely accepted credit cards, and many places in large cities also accept American Express.

Japanese cuisine is world-renowned for it's highly skilled preparation methods and unique and refined presentation. Unlike many other types of cuisines, Japanese do not rely on herbs and spice blends to season their dishes. Each ingredient is carefully selected and kept in harmony with it's own individual flavor. A traditional Japanese diet has high fiber content and is low in calories and cholesterol. rice is the main starch and is present in almost every Japanese meal. Udon and soba Noodles (hot or cold with many different types of accompaniments and dressings) is an important staple. Fish, Soya bean products, beans, seaweeds, vegetables, and fruit is an ever-present force in Japanese cuisine. Teriyaki, Tempura and Yakitori, (steamed, deep-fried, broiled and one-pot dishes), fill out a large of Japanese cuisine.

With the Sea of Japan to the north, the Seto Inland Sea and Pacific Ocean to the south, and mountainous regions in its center, Kobe and the Hyogo Prefecture are able to cultivate a wide variety of food products. Its seabream and octopus from Akashi and Kobe Beef from Tajima in particular are renowned throughout the entire country.

99.2% of people in Japan have Japanese as their first language

In Japan, the Value Added Tax (VAT) for most goods and services you are likely to buy is 10%. That's the amount automatically added to most purchases including restaurants, hotels, and consumer goods.

Tipping is not customary in Japan. In fact, it can be considered rude and insulting in many situations. Most Japanese restaurants require customers to pay for their meals at the front register, rather than leave money with the waiter or waitress. Tipping also isn’t required for cab or bus rides and many hotel services.

In April 2020, a new smoking law, which prohibits indoor smoking, fully came into effect. Smoking is generally prohibited in indoor public places and workplaces; however, in some of these places, owners or managers may create designated smoking areas. Smoking is prohibited in most forms of public transport.

Surrounded by the Rokko Mountains and the Seto Inland Sea, Kobe has a temperate climate.

In September, the average relative humidity is 77%.